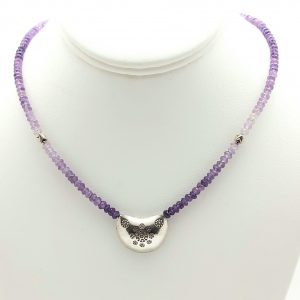 This beautiful 2 line necklace displays the diversity of colours that can be found in Sapphire. The beads are faceted 4mm rounds. I completed this necklace with a beautiful rough crystal of bright pink/red Rhodonite that is set in 925 Sterling Silver. The necklace is finished with a 925 Sterling Silver toggle clasp and has a length of 49.5cm

Sapphires are a variety of the mineral corundum as are the equally famous and valuable Rubies. Rubies make up the red side of the family while Sapphires are all the other colors – the famous blue as well as pink, green, purple, orange and yellow. There are also black and colorless Sapphires. The traditional blue sapphire represents loyalty, wisdom, truth, sincerity and faithfulness both in religious matters and in personal relationships. Sri Lanka is the oldest known source of sapphires along with India and Burma (now called Myanmar). As of 2007, Madagascar has been leading the world in sapphire production, though Sri Lanka continues to be the only steady producer of fine quality blue sapphire. Sapphire is the birthstone of September.

The Rhodonite crystal meaning comes from the word rhodon, which means ‘rose’ in Greek.  The pink symbolizes unconditional love and the Rhodonite radiates at the highest level with its striking hue mixed with dark swirls. Rhodonite is known for its capacity to bring emotional healing and to release blocked energy from within the heart chakra. It was once mined in the Russian Ural mountains and is now found in Sweden, Australia, India, Madagascar, Mexico, South Africa, Brazil, Canada and the USA.

Never miss new jewellery again? Receive the newsletter, your will be the first to know that there is a new update , show calendar, important announcements and news.